We at YesFinland are proud to announce a series of international guest weekends organized this fall!

REGISTER TO ALL AVAILABLE WORKSHOPS NOW!

Gael founded Strasbourg’s main improv group La Carpe Haute, and spends his time teaching and performing improv in and outside of France. He is known for his sound effects -even in silent scenes- and his incomparable mimed fishing skills.

When Laura is not traveling the world, she can be found cycling the Amsterdam canals between her jobs as actress, trainer and AD of TVA Impro. She loves slow motion running, bloody fights and smoking. On stage, that is.

They travel the world for teaching and performing, individually and together. This power couple is something to not miss!

You’ve always wondered how it is possible to give the feeling of a good fight, an epic chase or a slow-mo gravity-free earth saving mission? Then this directed ensemble is made for you!

During this directed ensemble we will learn how to create epic situations and give them to an audience, how to make any situation feel like part of an action movie, and how staging and techniques are important in improv to re-create these on the spot. Based on a strong non-verbal work and techniques used in the international improv shows like The Fraltons and Object of Affection, it will help you improve the use of your body on stage.

Lets give your character some good action and become “The Greatest Hero of them all”!

Students will perform a Showcase of the Ensemble in the first act of YesKlubi in Teerenpeli, Tampere on the night of the Workshop.

Your body isn’t just a vehicle to go from a place to another. Your mind isn’t just a control tower, slightly connected to your body by your spine. You are entire, so BE entire.

This is a workshop about connecting the mind to the body, to recreate what should never have been separated: you. Using crazy games to create an instinctive reaction right from your body, you will learn to develop your physicality from top to toe, and to be conscious of it.

Once you have forgotten your brain, you will use your body to reconnect and control your mind, create realistic reactions and surprise yourself.

Accept to lose control, your body knows how you feel!

In this workshop I will use my background as an improv and dance teacher to teach you how to bluff your way in ballet. Or in hiphop, Bollywood, country, disco, tango and many more styles.

You will learn the most important tricks and steps to make it look like you are a dancer. The audience can shout out any style in music or dance: you will know what to do. And what games you can play using your moves.

I have taught this workshop since 2009 to many Dutch, German, Swiss and Finnish improv groups and it is the most fun you will have in using your body on stage. Stiff as a board? No sense for rhythm? Perfect, then book this workshop now!

The space is the best friend an improviser has when on a stage. It is always there and can be anything. Even more: it can be as big and as amazing as your fantasy can take you.

In this workshop I will teach many ways to stretch your imagination. We will make the stage multi leveled, with moving angles and unlimited in its space. Think for example of action movies, sport contests, pursuits or scenes on a micro level. 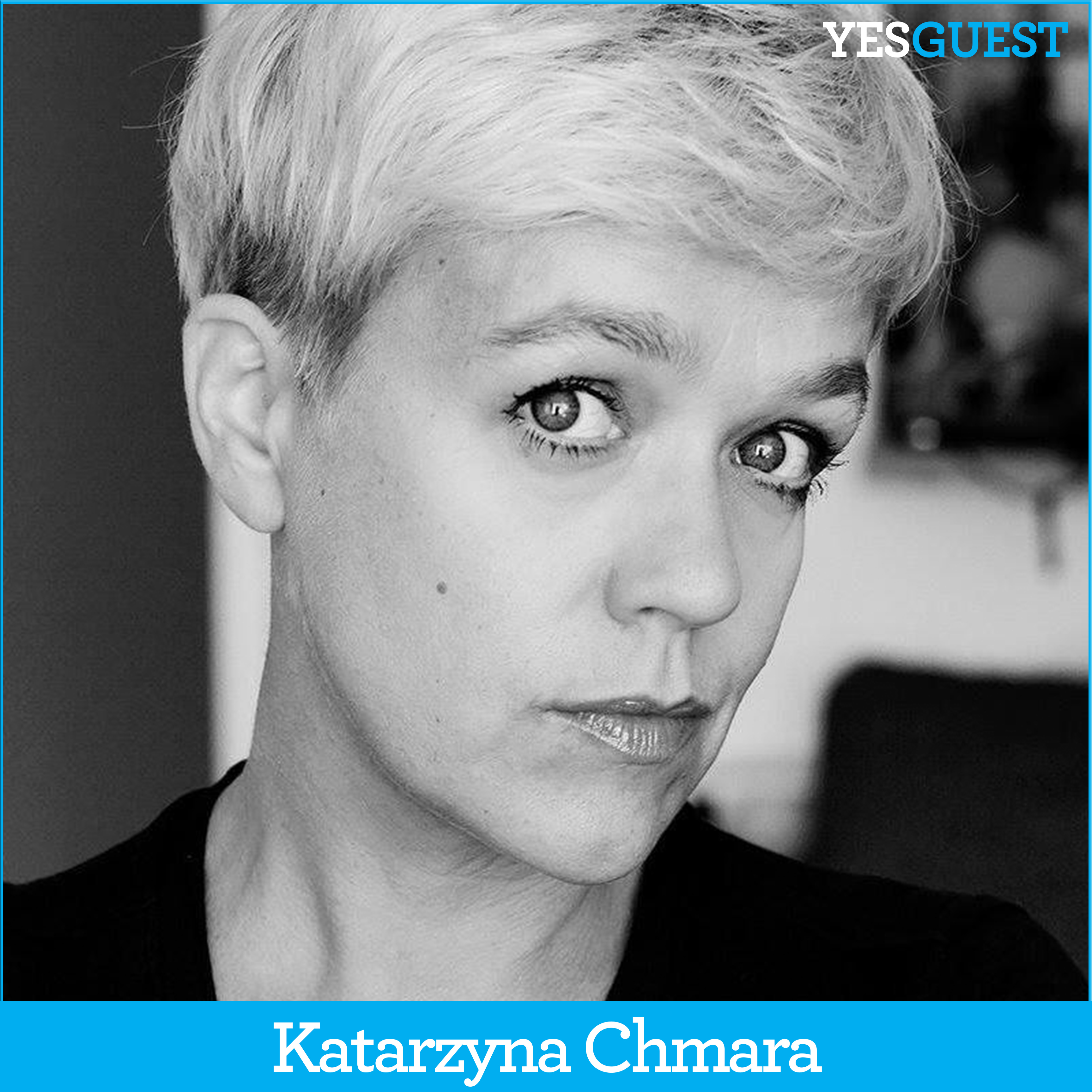 Our YesGuest for October 5th-6th is Katarzyna “Kasia” Chmara from Bydgoszcz, Poland!

Kasia Chmara is an actress and theater teacher and performs with numerous improv groups, such as the popular wymyWammy (Bydgoszcz), the duo group Two Sisters, the Lodz based theatre group Impro Atak as well as the European improv project Ohana and many others.

Chmara is an artistic coordinator of Improdrom- International Improv Festival in Bydgoszcz, Poland, she is experienced in the field of organisation, production and public relations.

She regularly leads theatre and improvisation workshops in Bydgoszcz and throughout Poland. Currently she is doing her PhD in Creating Character on script play through improvisation techniques. She has been an improviser for over 9 years, and she’s been teaching theatre since 1998.

Are you ready for a fairy-tale musical? Inspired by a childhood story from the audience, we’ll sing improvised songs, practice choreography and use these to build a fully improvised story based on a classic fairy-tale format.

Students will perform a Showcase of the Ensemble in the first act of YesKlubi in Teerenpeli, Tampere on the night of the Workshop.

This ensemble is suited for all improvisers!

Your voice is your power on the stage!

Have you ever had that feeling that when you express your emotions on stage your voice doesn’t always seem to be in the same team as you? Is your throat often dry and makes it difficult for the audience to hear you from the stage? Have you ever felt that although your characters may vary, they always speak in the same way and you cannot do anything about it however hard you try?

If you answered YES to any of the questions above… this workshop is for you!

Let’s put your voice in to work and practice how to:

When you believe in emotions on stage, the audience also will.  This workshop is focused on creating believable positive and negative characters.

Our YesGuest for November 2nd-3rd is Kiva Murphy from Barcelona, Spain!

Kiva Murphy is an Irish/ French actress who arrived to the wonderful city of Barcelona a little over 5 years ago kind of by accident. She got her first taste of improv as a teenager when she was training as an actress in The Gaiety School of acting. Once she began studying Theatre and Film in Trinity College she realised that she didn’t want to be so serious and switched to the world of comedy and clowning.

Since then she hasn’t looked back and trained at the prestigious physical theatre Jacques Lecoq in Paris and has been lucky enough to work with some of the most incredible clown, physical theatre and improv teachers from all over the world.

Kiva divides her time between Barcelona and performing her comedy and stand up shows around the globe, setting up her theatre company No Guilty Bones and touring her devised work to wherever will give her a stage for the night. Kiva got involved with BIG SI back in 2017 and since then has been leading workshops and integrating herself in the amazing improvisation community in Barcelona and has become one of their most sought after teachers.

Kiva’s teaching style is wacky, energetic, informative and very hands on. She likes to find the best in each person, allowing them to let go of their inhibitions and really play. The main thing that clowning and improv have in common is being in the moment. Once you realise that you can use your own physicality, the space, objects and your scene partners as inspiration, the pressure is off and you can really enjoy being on stage.

When you allow yourself to be present and get rid of the pressure of ‘I have to be funny’ then that’s when the magic happens.

When you are genuinely having fun on stage, you are captivating to watch. As children we play uninhibitedly and constantly invent new stories without fear of failure.

By allowing ourselves to be vulnerable, and be ‘in the shit’ we release our inner child and delight our audience. In this workshop we will use applied clowning and physical theatre techniques to bring pure joy into our improv. You will learn how to surprise yourself, and by removing the pressure to be funny you will truly be able to play…seriously.

You are on stage. There is an orange on the floor in front of you. There is nothing else on stage.

As improvisors we are used to being on an empty stage and creating everything for ourselves from scratch. What happens when you add an outside influence? Does it inspire you or limit your thought process? What else can an orange be apart from an orange?

In this workshop we will look into the many creative ways that you can you use and incorporate objects to bring you to places in your improvisations that you never expected.

In these 4 hours we will explore how we can be inspired by objects both mimed and real. We will push the limits of what that object ‘means’ and heighten our scenes to the point where any object will become a platform for your creativity and launch your imagination to places that you have never taken it before.

Surprise yourself in this workshop and you will never go fruit shopping in the same way again!

Our YesGuest for November/December 30.11-1.12 is Aree Witoelar from Oslo, Norway!

He has been improvising since 2005 and now with The Improv Speakeasy. He has performed in international festivals (Copenhagen, Bucharest, Amsterdam, Toronto) and in a dark alley, an underground bunker, and a Christmas Glühwein stand.

Cloud Atlas develops your sense of a complete piece – hitting all different corners in stage picture, scenic tones, tempo and style – while focusing on group focus in ensemble play and organic interconnection.

A pirate to charge without fear, a robot to keep the ship steady and a ninja to finish your set into a masterpiece.

In this workshop, I will show you how to shape-shift between roles, enhance your natural strengths and be an all-around improviser so you can fit with any team. *Inspired by Billy Merritt’s theory, developed independently by Aree Witoelar.