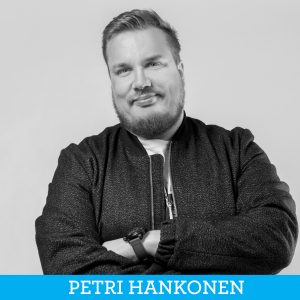 This episode’s guest is Comedian Petri Hankonen. Stand up has been Petri’s life since the early 2000s. He took first courses in 2003, organized by legendary Markku Toikka in Mikkeli. He has done about a hundred gigs in just under a year and have gained experience and got to run into in incredibly real and unique types. Both colleagues and clients. Petri has been working as a writer for such Finnish TV-shows as Stadi VS. Lande, Villi Kortti and Hyvät ja Huonot Uutiset. In the episode they talk about the life as a freelance writer for TV-panel shows and his career in stand up comedy.