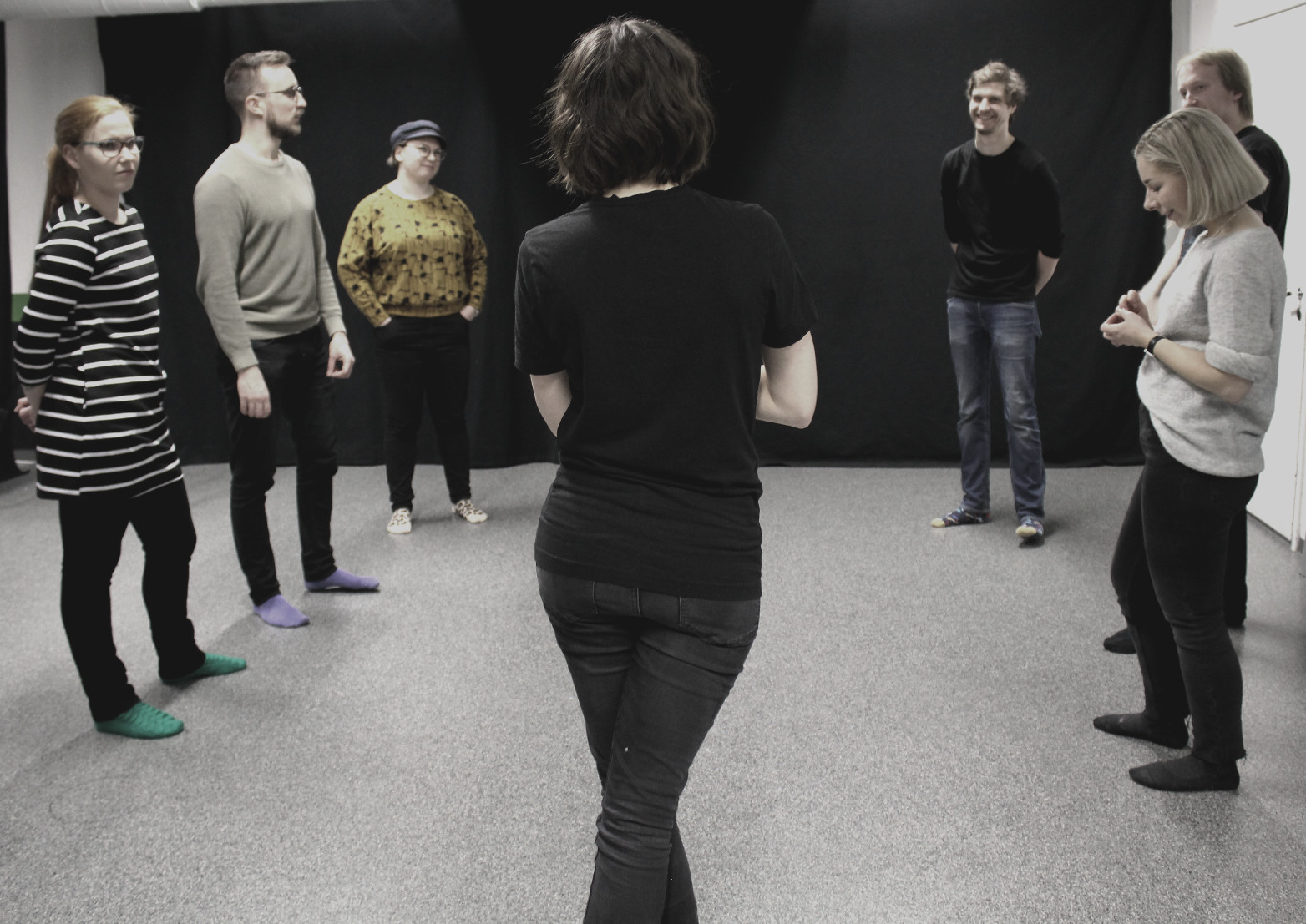 One small step for an improviser, one giant leap for Improv

We are on the brink of a new norm right now in the improv community. Improvisers worldwide have taken their first steps on “the Zoom”. Not only have we held rehearsals, we have taught classes, done short form shows, done long form shows, and even organised improv festivals all on Zoom – a cloud platform for video and audio conferencing. And all those who haven’t done it yet are without doubt experiencing some degree of the Zoom FOMO.

Don’t worry, FOMO isn’t what this piece is going to be about. But to everyone dealing with it I do want to say: it WILL become easier to say ‘no’. Even when you have nowhere else to be – please don’t be afraid to tell friends and family that you’ll call them back if now isn’t the right time. Just like our phones themselves, we need time to recharge.

For me personally this time of metamorphosis has meant a sudden imposition to develop stage presence skills to “tech-savvy” and the following is me trying to reflect this experience on to you, dear screen reader. For context, as a freelancer I make my main income from teaching and performing improv. When restrictions were applied to public meetings by the Finnish Government all of my upcoming gigs got cancelled. I personally couldn’t have afforded to also stop teaching. It was the only job I could continue doing. It was and still is a lot of pressure to not only create a new product, similar in content, equally worth paying for, in one week, for a medium I’d had no prior experience on. This is what this piece will be about.

I have been doing everything possible on-stage for the past 10 years. I have fashioned my way up to a place where telling a joke to 50 people, who are in the same room all looking at me, is considered exciting (at least from my half). I can do that without stressing about it neither before or after my performance. However this has not always been the case. Sometimes I do feel I’ve forgotten that I in fact spent the first six of those ten years panicking. Even some of my best memories on-stage, e.g. my first comedy piece in a monologue competition, would not be told in its entirety if I didn’t confess that just three nights before the show I had decided to quit.

I felt underprepared, unfit for the stage (anybody who didn’t experience performance anxiety should be up there in my stead), I was afraid of sucking at it, being seen as delusional (did she actually think that was funny), and that it would put an end to all my dreams of ever becoming a performing artist. After all, actors were supposed to enjoy all of it and I was terrified of even rehearsing it to my friends. It was overwhelming. Therefore – I quit.

Don’t get me wrong, I still do experience great amounts of stress (yes I cry) before important shows. But nowadays I don’t think of quitting anymore. I know and trust myself that I’m going to get up on that stage no matter what I feel. I know this because I did get up on it for the monologue back then. No, I wasn’t able to get rid of my thoughts of self-doubt, instead I went on-stage with all of those thoughts of self-doubt. I also fell off the stage when I entered, I completely “blanked out” after the very first line, I hit my head on a stage lamp and I came in on second place and was voted the ‘audience favourite’. My one-line-a-day diary entry from that night reads “Fear did not stop me”.

Now, in just the past couple of weeks most Improv Theatres have started doing improvised shows that have been adapted to live streams. Attempts at recording the magic that happens on-stage has never before quite impressed me. Yet now that there has been no choice, I can’t help but admire the ability of so many to bravely adjust. And with it try their hardest to stay active in the ‘now’. So many have been willing to literally share their learning process with the audience and that if anything is an act of bravery. And why not? After all, with improv none of it needs to be perfect. That’s exactly why all of this is so very Improv. And I really like that.

Based on all of the shows I’ve watched so far, my opinion is that you can always spot a good improviser doing good work no matter the video medium. Good Improv is good Improv, even in your bedroom. And this scares me in a way I haven’t really felt in a long long time.

During my two weeks of self-isolation, so far one of the best coping activities for me has been walking while having a phone call with another soul who is also walking somewhere else in the world. I’m a person who needs to talk in order to think. And I’d be in a total knot if it wasn’t for generous friends donating their time, indulging me by being available and receiving my rants. Thank you, that is right now one of the greatest acts of service.

During these walks once again, after many years of successful ‘just keep on swimmin’ – I  decided to quit. After one very lovely and very long walk specifically I came to the resolution of never performing in any public online shows. To just step into the sidelines, to focus on developing show concepts for others, just teaching, just writing. It is literally like all of my 10 years of building up tolerance for anxiety went out the window,  while I was forced to stay inside.

I’m once again underprepared. I’m afraid of sucking at it on a stage that the whole world can see. I’m afraid of having a bad show. And I’m afraid of a bad show, that will forever stay online, to put an end to all my dreams of ever continuing as a performing artist. Not to mention taking away all of my credit as a teacher.

I have cried. I have declared that I hate Zoomprov. Made lists of alternative career paths. Watched all of ‘Tiger King’. Done a bunch of other ridiculous and equally important things. I have also been in four online improv shows. I didn’t tell my friends and family about them at first, because I was worried that they weren’t impressing enough. I have taught four classes online. I have done this filled with thoughts of self-doubt. But I am still a good teacher. I am still a good improviser. (Yes.)

By his eloquent words I think Montaigne said it best,

“Kings and philosophers shit and so do ladies”.

Kings and philosophers and ladies throughout time have all been wracked by self-doubt and feelings of inadequacy. What I think this means, is we should believe that we are not barred by our vulnerabilities from doing what our idols do.

This is me speaking of myself. If I had held off on doing things until I felt ready, I would have never done any of the things I’ve found most rewarding. I needed all of those 10 years to understand what I need as an artist to continually grow. On this topic I can really only conclude in what works for me, but I am willing to take the leap of faith that someone else thinks the same way. So to those, here are some thoughts that I’ve been repeating in times like these, as a grounding mantra of sorts. I have found them to help me face new uncomfortable things, like online improv.

You are doing Improv. You are doing a silly internet video. Improv is very silly and people like it because you are taking that risk of looking silly. Getting some perspective always helps. Also walking helps.

That’s the whole point of Improv as performative art form basically. Exploratory means that we can not predict what effect it will have on others or ourselves.

For me that meant trusting myself that I will step online-stage even if I quit. Jutta is an improv teacher at YesFinland. She performs regularly on stages throughout Finland as an actor of The Improv Theatre Snorkkeli and around Europe as a member of the travelling improv group Doris Likes Everything. She is also a member of The SIN – Network of international improvisers in Europe.

She believes that improv requires you to be able to find enjoyment in taking risks.

This website uses cookies to improve your experience while you navigate through the website. Out of these, the cookies that are categorized as necessary are stored on your browser as they are essential for the working of basic functionalities of the website. We also use third-party cookies that help us analyze and understand how you use this website. These cookies will be stored in your browser only with your consent. You also have the option to opt-out of these cookies. But opting out of some of these cookies may affect your browsing experience.
Necessary Always Enabled
Necessary cookies are absolutely essential for the website to function properly. This category only includes cookies that ensures basic functionalities and security features of the website. These cookies do not store any personal information.
Non-necessary
Any cookies that may not be particularly necessary for the website to function and is used specifically to collect user personal data via analytics, ads, other embedded contents are termed as non-necessary cookies. It is mandatory to procure user consent prior to running these cookies on your website.
SAVE & ACCEPT